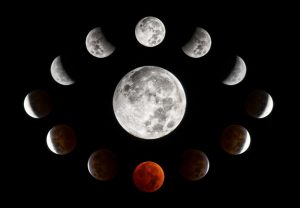 The New Moon celebrations were given by YHVH to Israel to commemorate, both under the Law of Moses and also in the future Millennial Kingdom (Lev 23:24; Num 10:10; 28:11-15; Ezek 46:1-8).  The New Testament tells those who are now believers in Yeshua/Jesus not to make too much of days, months, seasons, years, festivals, New Moons, Sabbaths – all of these things being shadows of things to come, but the substance is Messiah. (Gal 4:9-11; Col 2:16-17)

The Lord has told us that all of the Scriptures are written about Him, and we know that all of the sacrifices and holidays/appointed times are also fulfilled by Jesus in the entirety of His first coming, and in the anticipation of His coming again to fulfill all that is written in the whole of the Bible, which still waits for the Kingdom of God to come.  God has given His set holy-day times to remember who He Is, what He has done, and what He will do.  Even the Lord’s Supper/Communion serves those purposes. (1 Cor 11:26; Mt 26:26-29)

All things are created by God through Messiah Yeshua/Jesus Christ (Jn 1:1-3; Rom 11:36; Col 1:16), and all in Christ/Messiah find their true identity and purpose; thus, there is no Israel of God apart from Him; there is no true Church, Body of Messiah apart from Him.  Even the sun and moon exist only through His creation, but in the eternal New Heavens and New Earth there will be no need for the temporal sun and moon. (Rev 21:23; 22:5)  Again, these present things are but a shadow of the things to come, whose substance is Christ.  The Israel of God (the Millennial Israel, I believe) and the Church of God (those in Christ, whether dead or still living) are identified through covenant with YHVH God and His Anointed Son – the Holy Spirit indwelling the born-from-Above believers:  Messiah in us.

The New Moon is covered over, that is, darkened.  The Scriptures are not silent about this, since God commanded Israel to celebrate every New Moon, and to blow the trumpets on that occasion! (Num 10:10)  Jesus fulfills the meaning of the New Moon, and the Moon symbolizes Israel.
(read this article for a fuller explanation of the concealed New Moon, which also includes content from this present teaching: https://www.streamsinthenegev.com/school-of-fish/the-new-moon-covered-or-revealed/ )   From the New Moon, the moon waxes 13-14 days (increasing in revealed reflected light) until the Full Moon, and then wanes 13-14 days (decreasing in exposed reflected light) until the next New Moon.

Identifying with, and being the representative Israel (Is 49:3; Gal 4:4-5; Heb 2:14-18), the Man Yeshua came as the Son of God, stripped of His visible  glory.  And the Sun of Righteousness died, went down in burial (hidden in the secret, dark, lower parts of the Earth), and rose again visibly and triumphantly as the Bright and Morning Star on the third day!  As the risen Savior King and Head of the Church, believers ‘see’ Him clothed in divine light and majesty with the glory that was His before He came to His own, and to the world that He made.  Israel has no glory of her own:  the moon has no light but that of the sun which it reflects.  YHVH called Israel to be a light to the nations, but without receiving her Source of Light, she is darkened until. . . – having an inherent hope of a restoration through the covenant promises of God to Abraham, to Isaac, to Jacob, and to their descendants.  Born-again Christians are a light.  Yeshua has said:  “You are the light of the world. . . . ”  Stars are lights of their own, each with its own glory, but none outshining the glory of the Sun/Son. (1Cor 15:41;Mt 17:1-2)  Israel is still hidden from man’s view, as if away from the light of the Sun/Son, whom the nation still rejects because it prefers the darkness (Gen 3:7-10; Jn 3:19-21)  During the New Moon, the illuminated side of the Moon is then pointed away from Earth, but is in full  sight to God, who sees the end from the beginning! (Num 23:18-23)  The Church, through her historic replacement theology presuming that God is finished with Israel, also has consequently rejected the truth from God’s side that Israel’s future is assured. (Jer 31:35-37)  Israel began to be seen since the re-establishment of the State of Israel, and will be seen in her full [moon] glory when she rises up to remember the former glory that was given her by YHVH, and seeks with all her heart the true Son who has risen! (Hos 6:1-5; Rom 9:4); finally repenting, and accepting the Son of God, Yeshua, whom she pierced. (Zech 12:10; Mt 23:39)

The New Moon (which, technically, is only for a brief minute, but can seem to the natural naked eye to be extended over a period of some three days) occurs when the visible side is completely covered from the light of the sun (much like a blanket over us to keep out light) by being directly between it and the Earth.  It is the phase when the moon is ‘out of sight’, and the night, which the Moon rules, is less lit.  Yet, the stars are more brilliant and so many more can be seen when there is a New Moon.  Symbolically, it is Israel’s phase of “being there”, but out-of-sight, and, for too many people, also out-of-mind.  And, meanwhile, the born-again ‘star saints’ are given their opportunity to shine!  So God, in His infinite wisdom, gave Israel a statute to remember the New Moon.  The whole world — including Gentiles, angelic and demonic spirits, and the Body of Christ — are reminded of God’s New Moon which He gave for a sign and for seasons, and for days and for years:  every month (from the word, ‘moon’; in Hebrew חודש/chodesh, month), begins with the new and unseen moon that is there!  It is a globally recurring heavenly sign from the Creator and Redeemer that He has thoughts of peace and not of evil, to give Israel a future and a hope. (Jer 11-14)  The sun and moon are the means by which the Bible calculates days and years. They are also the means by which we determine YHWH’s signs and times of His appointed holy-days. (Ps 104:19)

The trumpets for the New Moon are for a memorial before YHVH.  God is remembering His covenant and promises – for His Holy Name’s sake – with Abraham, with Isaac, and with Jacob/Israel, and their descendants. (Heb 8:7-12) The New Moon of the seventh month (Lev 23:24) is basically a uniquely appointed New Moon prophetic wake-up BLAST! to Israel to gather together for preparing to meet her God on the Day of Atonements, either to have her sins forgiven and removed by calling on His Name on that Day (Num 10:9; Joel 2; Acts 4:8-12; Mt 23:37-39; Zech 12:8-15), or else to face His wrath like the rest of His enemies.  The Judge is standing at the door! Those who are saved will celebrate the Jubilee — truly a new beginning! — and as on all the celebratory days for His people, the trumpet is sounded. (Lev 25:8-10)  The historic steps towards the reestablishment of national Israel were the New Moon trumpet of God to His own Jewish people, and to the Church and to the nations in these last days, to remember that the God of Israel keeps His covenant promises to the seed of Jacob, and that the return of the Lord is nearing.  Israel’s full glory – the Full Moon – will be manifested when the Lord returns to dwell in the midst of His completely restored people as the fulfillment of the Feast of Booths/Tabernacles (which always begins at the Full Moon of the 7th month of the redemptive calendar) – the Millennial Kingdom.

Yeshua fulfills the New Moon in His death, burial (covering and removing our sins out of sight), and resurrection to life everlasting.  Israel fulfills the New Moon, which symbolizes her as a continual reminder of God’s covenantal faithfulness — and of her hope in Him — that there is a day coming when her redemption will shine forth, the glory of the LORD will shine upon her, and all the nations will praise YHVH, God of Israel, and call her blessed when He cleanses her from all her sins against the Lord.  (Lev 26:40-45; Ps 117)  There is joy when a woman becomes aware that she is pregnant, in the darkness of the womb; there is greater joy when she has given birth, the baby having come out into the light of the world! (Jn 16:21-22; Lk 15:7,10,32)  What began in secret in the dark inward parts, (even as in the womb at conception. ..Ps 139:11-15), will come to light and be seen by all in its full glory, that which was already conceived by the Holy Spirit for a new birth and the celebration of life (Is 66:5-14)!  Yeshua’s conception was not ‘light’; His birth brought to light the public knowledge of the promised Messiah and Lord.  Blessed is he who believes and has not seen!  Even the creation began with darkness, being outside of God, who is Light!  The heavens declare the glory of God! (Gen 1:2)

God is redeeming Israel today.  He is again returning His attention to Jerusalem.  He is calling His people to remember Him — and to remind Him of His stated purposes (Is 62:6-7) — and to rejoice in His goodness and long-suffering, which lead to repentance unto salvation.  Let all who want God’s purposes to be fulfilled, who desire the peace of Jerusalem, not keep silent, but remind the Lord as workers with Him to make Jerusalem a praise in the Earth, with a highway of holiness and blessing between Egypt and Assyria, running through Israel.  YHVH God will remove unrighteousness from Jacob, and all Israel will be saved.  Even so, come, Lord Jesus!