Tomorrow is the first day of the seventh month on the Hebrew calendar.  In the Bible it is called the Memorial of the Blowing of Trumpets. (Lev 23:23-25)  This appointed time has to do with the end-times call of God to His people to repent and confess their sins against Him, and to receive the atoning sacrifice of the gospel by the innocent Scapegoat being made sin for us — bearing all of the iniquities and transgressions and sins of the people — sent out of the camp on the Day of Atonements.  On the basis of the “all Israel [that is] saved” accepting that sacrificial death on the cross of Yeshua/Jesus, and of His resurrection from among the dead, YHVH God of Israel will tabernacle/dwell among His forgiven, justified, and sanctified people forever. (Lev 16; Zech 12:10-14; Rom 11:25-27; Is 65:17-25; Jer 31:31-37; Rev 21:1-5; Mt 23:37-39)

God has opened up the Book of Daniel for us in these last days.  It is a “trumpet blast”, a loud wake-up call and a call to assemble together – first of all to the household of faith among the Jews and Gentiles who know the Lord!  The purpose of the 70 Weeks prophecy is to accomplish the salvation of God’s chosen people —  the descendants of Abraham, of Isaac, and of Jacob – for His holy name’s sake.  Through the gospel of the New Covenant, He extends this grace and mercy to every tribe and tongue and people and nation!

While we saw that in the first verses of this chapter there are clear references to Alexander the Great defeating the Persian Empire and to his own kingdom being divided into four after his death, we still need to remember that the divine Man told Daniel that the word revealed to Daniel had to do with what would happen to Daniel’s people in the last days. (10:14)  There are those who think that the verses of today’s teaching are all past history; while there are others who believe that the full-fillment of these verses and wars are still to come.  I am of the latter group.  There is both partial near and complete far fulfillment within the prophecies.  As I said last week, God can accomplish a lot in a short period of time as a proof that He is true to His word, in part and in full. (Ezek 12:21-28; 2Pt 3:1-9)

Israel is, as my friend, Kelvin Crombie, puts it,­­ “the land between empires”. Israel is the land bridge in Asia lying strategically between Africa and Europe.  It has seen many wars, and is a key to controlling the Middle Eastern region by whichever empire.  The King of the North and the King of the South will in that day — when the Lord reigns on Earth — be at peace, with Israel a blessing in the midst. (Is 19:23-25)  In the meantime, there is war…much war, and violence in the streets.  Come, Lord!

Historically, after Alexander the Great died in 323 BC, four of his generals rose up and gained control of the divided Hellenic (Greek) kingdom into the four regions of the empire.  Of these four, two became prominent:  Seleucid King of the North (today’s Turkey, Syria, Lebanon, Iran, Iraq), and the Ptolemaic King of the South (today’s Egypt, Libya, Sudan).  The eighth king of the Seluecid dynasty was Antiochus IV (Epiphanes), and the Israeli priestly family of the Hasmoneans (aka, Maccabees) fought against Antiochus and the pagan Hellenistic influence on the Jewish people and the Temple worship — and against the Hellenists from among the Jews — and won in 165 BC, from which comes the holiday of Hanukkah, celebrated on the 25th of the ninth month on the Hebrew calendar (Chislev/December, the ninth month from the Passover in Nisan/April) (1Mac 4:36-59; 2Mac 10:1-8).

There are many who make those wars and that desecrating event the climax of evil in this chapter; however, Jesus/Yeshua wants the reader to understand that this is not the fulfillment of this chapter, but that it speaks of the wars between kingdoms and nations in the last days, and of the abomination of desolation by the Antichrist at the end of the age,  3 ½ years before His return. (Mt 24:6-22)

In our verses for today, we see ongoing war and political scheming between the kingdoms of the North and the South.  These things take place in our day as well between competing powers, and of those seeking protection — either by them, or from them.  I do not want to get into all of the many details in this part of the chapter, but I do want to look at a few specific verses to consider their importance to our study. 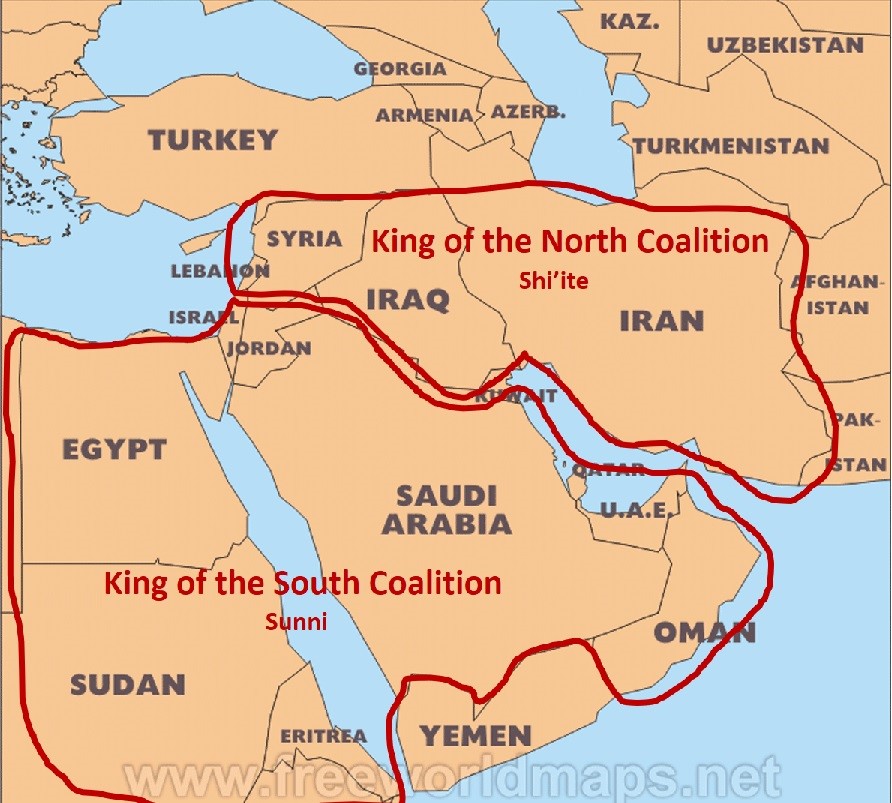 While this could refer to the end of the rule of the first king of the South (Ptolemy), it could also look ahead to the time of the end of the age, when these prophetic types will be fully realized leading up to the revelation of the Antichrist.

v 11  The King of the South is enraged and goes out to war against the King of the North, which has raised a large standing army, but will be defeated.

v 12  The King of the South will lift his heart [with pride], and slaughter thousands, but will not remain strong.

Pride comes before a fall, and the King of the South did not consider that he was vulnerable.

v 13  The King of the North will return with an even larger army than before, and will come at the end of the time of years with a huge army and much equipment.

What we have seen repeated in these six verses till now “the King of the South, the King of the North”; the “large war army”; and the “end of years”.  In the word that was revealed to Daniel in Chap 10:1, he saw “a large/great army”.  In 10:14, Daniel was told that this had to do with “his people in the last days”.  We see how the Land of Israel is situated between the two kingdoms of the North and the South, which are constantly warring and plotting against the other, which obviously affects the Jews and Arabs living in the “Beautiful/Glorious Land” during that time.  Ever since the establishment of the State of Israel in 1948, there have been numerous wars against Israel from enemies north, south, and east, as well as efforts by these countries – and from the west — to control parts of the Holy Land in opposition to the sovereignty of the Jewish people, granted not only by YHVH God, but also by the World Powers repeatedly since 1920.

Yeshua told His disciples that prior to His return to restore the Kingdom of God to Israel, that they (we) not be deceived, [even though Israel is reestablished as a sovereign nation in the Land].  There would be false messiahs/christs who deceive many.  There would be wars and rumors of wars, but do not be troubled, for these things must come to pass, but the end is not yet.  For nation will rise against nation, and kingdom against kingdom.  And there will be famines, pestilences, and earthquakes in various places.  All these are the beginning of troubles. (Mt 24:4-8)

We know that today Israel has a peace accord with Egypt, and there are many in Israel who side with Egypt against Syria’s and Iran’s plans against Israel.  Egypt also aids Israel against Hamas in Gaza, and Hezballah in Lebanon.  Israel also has a peace agreement with Jordan, and very recently with the UAE and Bahrain.  All of these nations allying with Israel are Sunni Islamic, while the northern kingdom nations are mostly Shia Islamic.  These Muslim factions fight against each other, vying to become the Caliph of the Islamic Kingdom — the fourth Kingdom and Beast.  Israel is putting its trust in themselves and in  “Egypt” (and, of course, the U.S.) – the arm of the flesh — rather than in the Arm of YHVH, God of Israel.  This trust and hope will not succeed, but only calling upon the name of YHVH, the Lord Jesus Christ/Yeshua the Messiah!

But also in this verse, Daniel and we are told that from within the Israeli Jewish people will be those who lift themselves up with pride and power to forcefully fulfill the vision. (Mt 21:33-44)  These are not God-fearing Jews, but Law-breakers and rabble rousers, unfaithful to the way of YHVH. (Gen 18:17-19) (I am not referring to the military that has a God-given responsibility to defend the citizens and borders of their own country; nor of those who know that there is supposed to be genuine peace with righteousness, for the Creator and Redeemer have spoken of it, and are deeply disturbed that it seems so unlikely the way things are going.)

What vision?  I believe that, as we can see happening in our own day, that there are those among our people who will use force to possess and inherit the promised land, without repentance toward God and faith in the Lord Jesus Christ. (This is the very thing we are talking about concerning these present holidays/appointed times!). God may let them accomplish it; maybe not.  Israel still for the present time remain enemies of the gospel for the Gentiles’ sake, but beloved for Abraham’s, Isaac’s, and Jacob’s sake.  Apart from the righteousness of God through faith in Yeshua, they will not succeed; it will fail to bring true peace and security.  It will not make an end of transgression and sin, or accomplish reconciliation for iniquity.  These are objectives of the 70 Weeks for God to fulfill the vision and prophecy, and to anoint the Most Holy.  God will judge those nations and persons who seek to destroy His people and nation and land, whether working from within, or from without.

Yeshua also says something similar in the New Testament:  “And from the days of John the Baptiser until now the Kingdom of Heaven suffers violence, and the violent take it by force.” (Mt 11:12)  “The Law and the Prophets were until John.  Since that time the Kingdom of God is preached, and everyone is breaking into it.” (Lk 16:16)  I know that there are variant translations of these verses, and especially differing interpretations of them.  But I believe that this verse corresponds with Dan 11:14.  There are those within the Body of Messiah/Christ who want to “take the world for Jesus” – even by force of arms, if necessary —  apart from His actual physical return to take back the world that is His, establishing GOD’s kingdom to Israel and all the nations and throughout the entire created universe.  Until the end of the age, we are commanded to preach the gospel to all.  YHVH plans to personally dwell in the midst of His people Israel, and to reign from Jerusalem on this Earth for the next 1000 years after putting down all opposition to the Father and the Son and the Holy Spirit.  He gives the kingdom to the saints to inherit with the Lord!

On this day of remembering the trumpet blasts, and the 10 days of awe to Yom Kippur/Day of Atonement, let us prepare our hearts to let God fulfill His promises, and to be forever grateful for the forgiveness of our sins and the free gift of eternal life with Him through believing in the name of the Son of God, Jesus Christ/Yeshua the Messiah.  Let us also remember to pray for the Jewish people, and all others, to be saved while it is still “today”.