As we saw in Chap 8, this chapter also has within its prophetic details partial near-term (up to a few hundred years later!) and complete long-term fulfillments (concerning the end-times thousands of years later) within the same descriptions.  Both chapters give large amounts of specific details of kings and battles that refer to Persians and Greeks, and of Alexander the Great and Antiochus IV – Antiochus Epiphanes.  Yet both primarily clearly speak in focused detail of kings and battles at the time of the end, of the time of the Antichrist and his large army and wars and blasphemies against Yeshua/Jesus and against the covenanted people of God – the Jews (and Christians).

This precision – both near-and far-term – have given critics of the Holy Spirit-inspired Scriptures, and of the nature of prophecy by the God who knows all from the beginning to the end from first to last, to claim that Daniel the Prophet is not the author of his book, nor was it written before the recorded historical events actually occurred!  The Scriptures written for us in the book of Daniel are the Word of God, and all believers in YHVH God, and in His Son Jesus Christ should, with humble fear, heed the words of the prophets written on the pages of The Bible. (Is 46:9-10; Mt 28:18)

In Chapter 10, verse 14, The divine Man told Daniel that He came to explain to him that the word that was revealed to Daniel (v 1) has to do with what will happen to Daniel’s Israeli Jewish people in the last days. (10:1, 14)  The Messiah Himself tells us that what is written in Daniel, and very specifically in this Chapter 11, has to do with the time of the end, leading to His coming again, and of the Kingdom of God being restored to Israel and to the Gentile nations. (Mt 24:15)  For us living now in this generation, this future application is of utmost importance to us, even if some of us are not so interested in past history.  The Holy Spirit is giving us many details to help the saints be overcomers by faith in the end-times, and to help us explain to others what is happening….and why:  YHVH is purifying for Himself a holy people and nation – Israel – and a holy and spotless bride for the Lamb of God to rule and reign with Him in holy righteousness.  This is what the 70 weeks prophecy is to accomplish.  These events have not yet been fulfilled.  Therefore, hard as it is to fathom, Jacob’s Trouble/ the Great Tribulation, is still to come.  Do we love Yeshua/Jesus in this adulterous and sinful generation? (Mk 8:31-38)

We must also remember from our study of this book, that the whole of the image in King Nebuchadnezzar’s dream (Dan 2:44-45) remains standing until Yeshua/Jesus returns in great power and glory to remove forever every kingdom that is against Him.  The victory is God’s, and we share in it!  Hallelu-Yah! 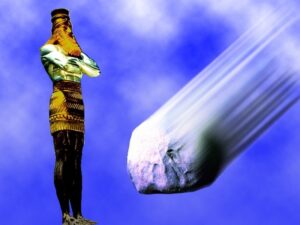 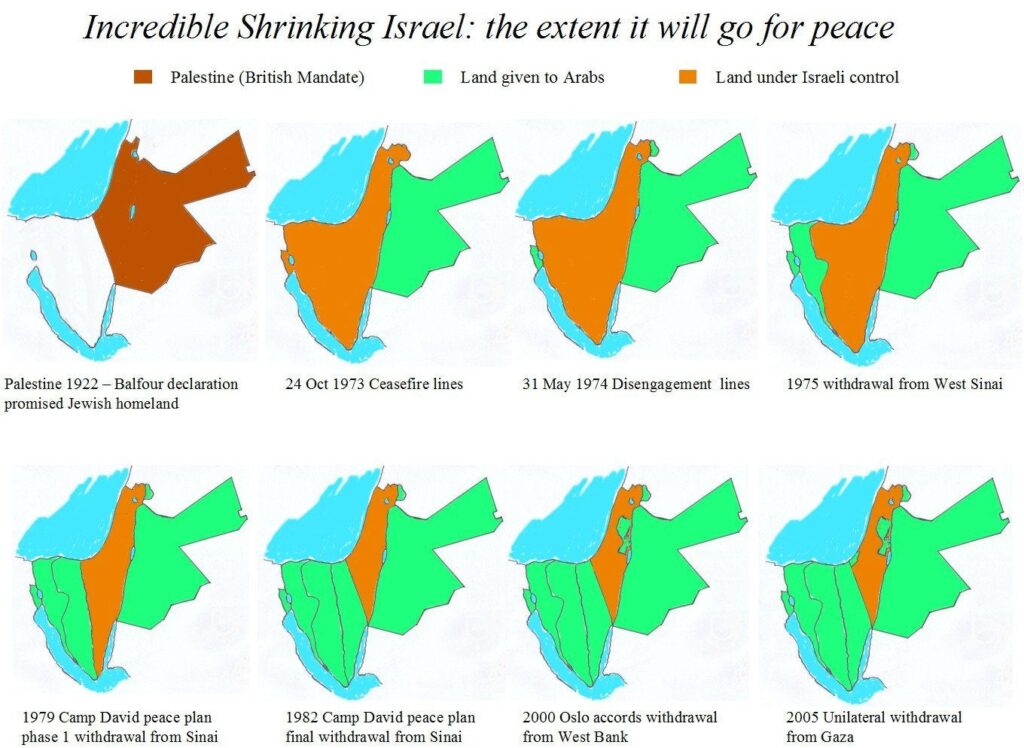 So we see, that until that time, these former kingdoms of that image centered in Middle Eastern Babylon (Iraq), Media-Persia (Iran), and Yavan (Greece/Turkey) are again all modern nation-states, and have sought in our generation to rise again, leading to the final beast kingdom and Antichrist.  Even Israel has risen again (praise the LORD!), but is seeking to establish herself apart from returning to her God and King and praising the Lord.  All these will fall short as they seek their own glory and righteousness, but God’s covenant promises for His people remain sure, for He is faithful to the shed blood of the New Covenant crucifixion and the resurrection of the King of the Jews, Yeshua/Jesus the Nazarene, which secures all of those promises.  Things work out for good only in God’s way.  To Him be the glory, and to the Lamb upon the Throne!

v 1  Daniel writes that the divine Man (see Ch 10) told him that He also stood up to strengthen King Darius the Mede in his first year.

Daniel was in the captivity throughout the whole 70 years of the prophecy plus a few more, and saw kings come and go, and kingdoms replaced.  He served them all and was faithful to the God of Israel as a powerful witness that YHVH is the Most High God. (1:21)  He heard the decree of King Cyrus that encouraged the Jews to return to their own land and to Jerusalem to rebuild the Temple and city.

v 2  The Man is going to tell Daniel the truth [about the word that was revealed to Daniel].  Three more kings after Darius the Mede, would arise in Persia, and a fourth, who will be much richer than all of them.  His strength is in his wealth, and he will stir up trouble against the Kingdom of Yavan (Greece/Turkey). (see Ezra 4:5-7)

Everything that Daniel had heard till now was “truth”, but this time it was going to be bitter to taste and to swallow.  The truth is not always easy to hear, especially when “bad things” are part of it, and Daniel was going to hear much of what is bad, before the good would come.  With YHVH God, the “sweet” will come to those who remain faithful to Him until it does. (Jn 16:12-15; Rev 10:8-11)

I will also tell you the truth:  there is much confusion and controversy over the names and years of the Persian kings during this Second Temple period.  I do not want to get into all of that in this series, but want to concentrate on the focus on the time of the end.  I am convinced, though, that the Holy Spirit inspired Daniel to write what he heard, and that God’s greater-wisdom-than-ours is for a reason that not all of it is clear to us.  His focus is on the last generation that sees the glory of the Lord’s glorious return beyond the present suffering of this world!  He wants us to hope in Him and to believe what He tells us.

God can work quickly to advance His purposes as the time nears.  Look at all that Israel has accomplished as a nation in such a short time!  He has been long-suffering, wanting that all should come to repentance and be saved, but He will bring His word to pass in its appointed time.  Although the wars prophesied in this chapter are many, they do not seem to cover a vast amount of time.  This generation, Yeshua tells us, that sees the figtree blossom (the modern nation-state of Israel) – and He was making many references to Dan 11 – will see all these things come to pass. (Mt 24:32-51)

v 3-4  A mighty king will arise, who will rule with great power, and do what he wants. (see also v 36)   His kingdom will be broken up and divided towards the four winds of heaven, that is, in all four directions.  It will not go to his descendants, nor will they have the same power as his alone.

We can see in these first four verses descriptions that speak of Alexander the Great, who conquered the Persian Empire.  Alexander is the first king of the third kingdom of bronze, and the third beast described as a leopard with wings and four heads, which are written about in Chapters 2 and 7.  Greece defeated Persia in 334 BC, nearly two centuries after Daniel had died.  The Greek Empire was divided after Alexander’s death in 323 BC into four regional kingdoms ruled by four of Alexander’s generals.  Of these four, two became prominent – Seleucus and Ptolemy:  the King of the North, and the King of the South.  The Greek Empire fell to Rome in 146 BC.  Antiochus eventually came out from this northern Assyrian-area kingdom.  He is particularly famous because of the Maccabees and Hanukkah from 167-165 BC.  But Yeshua/Jesus tells us that this central figure in Dan 11 is not Antiochus of past history, but the Antichrist of still future history. (Mt 24:15)  Chapter 11 tells us much more about the fourth kingdom of iron mixed with clay, and of the fourth beast and kingdom, coinciding with the final 70th week (7 years) prior to the return of the Messiah/Christ.

Other references to the origin of the Antichrist, the “little horn” of Dan 7:8-11; 8:8-14; 11:21 – 12:4
–the Assyrian – Is 10; Mic 5
–Gog of Magog (Turkey) – Ezek 38
–from Kingdom of the North (not from the West) – Ezek 39:1-8; Dan 11:13
–false prophet and antichrist deny the true Yeshua/Jesus as Messiah, and deny the Father and the Son:  Judaism/Islam concentrate the spirit of these present-day religions – 1Jn 2:22-23  (This is probably also a hard truth to swallow.)  Judaism says that there is a messiah, but whoever, or whatever, messiah is, it is not Jesus/Yeshua.  Islam says that God is not a father, and has no son.  Only by the Holy Spirit will one be capable of believing, and of confessing the truth of who the true God and Savior is.  Yeshua/Jesus is building His church/body/bride on the Rock of who He is:  the Messiah, Son of the living God.

Understanding what is written in Daniel in the Old Testament (Tanach) is key to understand many of the prophecies in the New Testament about the time of the end.  The Apostle Paul also wrote of these things, and said that he declared the whole counsel of God.  We must listen, and do the same.