God was manifested in the flesh, and great is this mystery!  When you imagine and think of what Yeshua the Messiah/Jesus Christ looked like as a man, what images come to your mind?  Most of us have seen many different paintings and drawings of Messiah done by many artists throughout much of the history of the last two thousand years.  There have been many actors who have played the part of Jesus in plays and movies.  We see Jesus dressed in various styles of clothing; His skin color in varying shades of darkness or lightness.  His hair is nearly always thin and straight – but maybe it was black, thick and curly — and a length that most people would consider “long”.  His eyes are sometimes black, sometimes blue.  We would probably picture Yeshua as being physically strong, but not muscular:  He walked a lot of miles (kilometers and furlongs), and He had the strength of the Son of God to pull up Peter from deep water while He Himself was standing on the water! 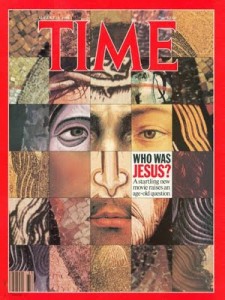 What does the Word of God have to tell us about the appearance of Yeshua of Nazareth when He was here the first time as a flesh and blood Man?  Not too much, really.  Jesus belonged to the tribe of Judah, born of a Jewish mother in Israel, situated on the western edge of Asia in the Middle East of today.  The apostles and writers of the New Testament accounts say virtually nothing about His physical appearance – whether of Himself or compared to anyone else.  (They speak much about His excellent and perfect moral character and conduct!)  As the son of David, was He ruddy and good-looking, like David (1Sam 16:12), or like the “beloved” in the Song of Songs (5:10)?  Yeshua probably had a beard.  The prophet Isaiah tells us that “He has no form or comeliness, and when we see Him, no beauty that we should desire Him.” (53:2)

Jesus, being the perfect Lamb of God who alone sacrificed Himself for our sins, would have been without blemish or defect, both physically and spiritually (Lev 1:10; 21:17-23; 1Sam 16:7; Heb 4:15).  In that Jesus pleased God His Father in all things because He loved Him (Jn 8:29), we can be sure that He did not tattoo His body or style His hair in strange ways like the heathen do (Lev 19:27-28; 21:5).  Yeshua would not have intentionally balded Himself.  For YHVH God has called His people to be holy, because He is holy.

Speaking of hair, is there anything in the Bible which sheds light on the length of Messiah’s hair?  As mentioned above, when people are asked to describe Jesus, almost always one of the first things they say is that he had long hair.  But did He?  Nazarites had long hair when they were under the vow (Num 6:1-5), but Yeshua was not a Nazarite (nazir נזיר) in the legal sense.  Yeshua drank wine and grape juice (Lk 7:34; Mk 14:23-25).  Yeshua is the Nazarene (netzer  נצר) (Mt 2:23), the chosen Son of David who is greater than David’s son (Is 11:1; Lk 20:41-44).  The Holy Spirit – the same Spirit of God who conceived Yeshua in Mary’s womb and with Whom He was filled the whole rest of His birth and life, and Who rested upon Him at His baptism – inspired the Apostle Paul to write in his letter to the Corinthian believers (1Cor 11:14) that long hair on a man is a dishonor to him.  Surely the Holy Spirit is not going to be calling long hair on a man dishonorable if the Lord Jesus Himself had long hair!

In addition, the Old Testament tells us by the same inspiration of the Holy Spirit that the priests of YHVH God are not to shave their heads, nor let their hair grow long and disheveled, but to keep their hair well-trimmed (Ezek 44:20; Lev 21:5).  Yeshua came to fulfill the Word of God His Father.  He did not come to annul but to fulfill the Law and the Prophets, and this will be fully accomplished during the Millennial Kingdom of God on the Earth when Israel – as a people and nation – comes into the New Covenant (Jer 31:31-34) at the second coming of the Lord Jesus Christ.

We, who have already entered the New Covenant by faith through the blood of Messiah, and have already received the gift of salvation through the forgiveness of our sins by God, are all priests chosen and sanctified unto the Lord.  In so far as it is possible with us, we are to make choices which please our Father in Heaven, who has shown such love for us, and not take advantage of His grace to look like, dress like, behave like those who do not know Him and Yeshua whom He sent.  This is true for males and females.  All things may be lawful for us, but not always helpful or worthwhile (1Cor 6:12-13; 10:23-24).  Our concern should be: how will my example bring honor to God our Father, to Jesus our Lord and Savior, and to the Holy Spirit.

Yeshua/Jesus is the Son of Man (Ben-HaAdam) (Lk 21:36).  What did He look like when He was here?  No one today really knows for sure, but the clues which have been revealed to us through the Bible do help us to clarify certain points.  Although Yeshua came as the Seed of Abraham and of David – an Israeli Jew – He is also “Everyman”.  He knows and understands every person – male and female of every status and color – from any tribe and ethnic group, and every person from any place at any time can relate to Him as the One who is theirs and they are His (Gal 4:4-7).

This same Yeshua – now seated and described in glory at the right hand of the throne of the Majesty (Hagvurah) in the Heavens (Rev 1:12-18; 5:5-6) – still today either inspires or antagonizes millions of people.  Who is Jesus/Yeshua to you (atah)?  What does He look like to you? (Ps 45:1-4).

James 2:14-26 – The Demonstration of Faith by Works of Faith

Salvation is of the Jews, but Not Jewish

God Is, and Will Be Known To Be So