In our lives there are times when we are greatly burdened but do not really understand what to do about the matter that weighs on us so heavily.  The apostle Paul writes that as believers serving the Lord, there are times and situations when we are “hard-pressed on every side, yet not crushed; perplexed, but not in despair”. (2Cor 4:8)  This is what Daniel was going through in his life serving YHVH his God in a foreign land, rising to power and influence with Gentile kings and their kingdoms. (Ps 137:1-6)  Daniel’s response to this was to humble himself with faith believing in the Most High God. (2Chr 7:14; Ja 1:5-8)  Daniel is one of the great men of faith and wisdom in the Bible (Ezek 14:14,20; 28:3), and he set himself from his youth to be faithful to the God of Israel and to His covenants.

To repeat, we are not studying the Book of Daniel simply for knowledge, but we want to believe what the Holy Spirit is saying to us, and to respond – even to repent, if required – to the truth as it affects our own lives and the lives of others.

Daniel tells us the events of this chapter occur during the “first year of Darius.”  This means that Belshazzar has already died, the Babylonian empire (gold; lion) has ended, and the Medo-Persian empire (silver;bear) has now taken its place. (Dan 5:30; Jer 25:12; 29:10-14; Zech 1:12)  Daniel was praying perhaps during the time of his prayers when his peers and rivals in the kingdom of Darius were scheming to catch him praying to any God other than to the King Darius, and so have him thrown into the lions’ den. (Dan 6)  His burden was both personal and national.  This prayer follows chronologically the vision that Daniel had in chapter 8, which caused him to faint and be sick after Gabriel explained it to him.  Daniel was told to seal up the vision, because it pertains for many days in the future. (12:4,9)  This again puts the focus of the little horn prophecy at the time of the end, and on the Antichrist, rather than on Antiochus Epiphanes. 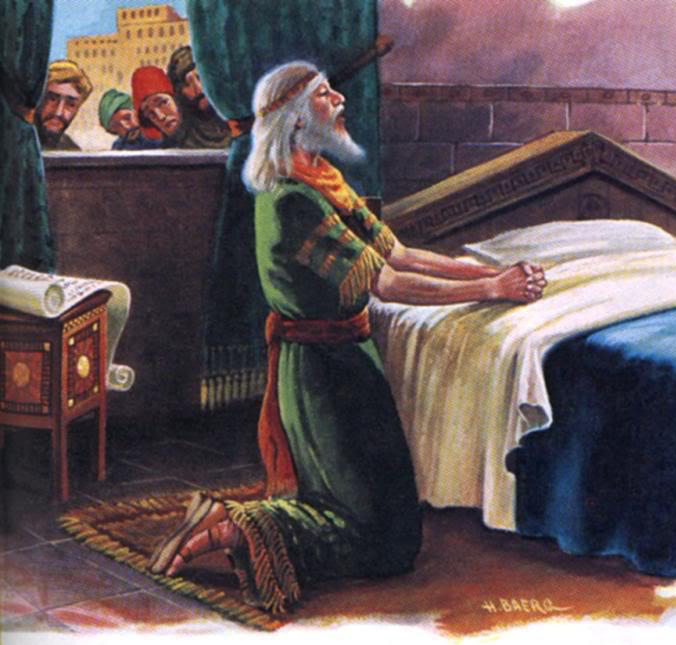 In Ch 9 Daniel was responding to a time of transition in the life of his people at that time:  the 70 years of captivity in Babylonian exile which YHVH had promised was ending.  (v 1  He was reading Jeremiah in the first year of Darius, son of Ahasuerus, a Mede by descent, in 539 BC).  Daniel believed what Jeremiah the prophet had prophesied and written concerning this covenantal judgment, even though Jeremiah was constantly contending with rulers and false prophets in his day as to whether he was speaking truth or not.  Daniel responded to the Word of God with humility and with prayerful faith and fasting. Jeremiah’s prophecy brought the past to the present in Daniel’s life, who lived in that very generation to see it. God was going to vindicate His prophet, Jeremiah.

From all that we have been studying in the Book of Daniel, we also have indications in the prophetic word as to the time of Messiah’s second visitation when He returns.  Prophecy and current events – history – are coming together in our days.  We are in a transitional generation, with the final 70th week (7 years) drawing near, just as Daniel understood that the end of the 70 years of captivity was coming soon.

In this prayer of confession and petition by Daniel the prophet recorded for us in Ch 9, we learn that at least part of the Bible (Tanach/O.T.) was already available to the Jewish people, and that Daniel read what he had.  From the Law of Moses, YHVH had given His covenant with its commandments, its promises, its blessings and its curses, its judgments; and based upon the covenant, the people were in captivity in Babylon as a chastising punishment, and the desolation of Jerusalem and of the Temple were all in accord with the Law of Moses and the words of the Prophets whom YHVH sent to His people. (Lev 25:3-5; 26:27-35; Num 14:20-24; Pr 3:11-12; Jer 44:4; Lk 13:34-35)  Daniel believed the Word of God, and sought God’s face and His righteousness.  Daniel discerned the signs of his generation in which God was planning a great redemption.

The beginning of Daniel’s prayer was to ascribe glory to God, and to praise God’s righteousness and covenant faithfulness.  Daniel confessed both his and his people’s sins.  This shows the genuine humility of Daniel’s heart and mind towards God and towards his own Jewish people:  we read nothing of any sins in Daniel’s life, yet he identified with his sinful people before the Holy God.  This is the same that the High Priest was to do on the Day of Atonements, and that Yeshua did for us in His baptism by John, and especially on the cross to bear the penalty for our sins in our place of guilt and shame.

While God acknowledged Daniel’s own righteousness before Him, yet God is still waiting upon Israel as a nation to confess her unfaithfulness and sins against Him and the covenant which He cut with them alone among all the nations of the Earth, in order that He can restore her and do for her all that He has purposed to do for the glory of His own name, and for the blessing to them when they acknowledge His righteousness ­­­in punishing the people for their sins, and that He alone is holy and righteous. (Lev 26:40-46; Hos 5:15 – 6:1-6; Mt 23:37-39; Acts 2:17-21)  Daniel and the people and the leaders of the people were shame-faced for all their sins and refusal to heed the Law and the words of the prophets whom God had sent them continually to call them to repentance. (Jer 44:4)

Notice here (vv 7,9) that Daniel is not only saying that the Lord is righteous, merciful, and forgiving, but these character attributes belong to Him.  For us who believe in Yeshua and have received the Holy Spirit, these qualities become ours in Messiah as we are conformed to the image of the Son of God, which is God’s will for us, often using persecution and tribulation to transform our character into more of His character for a testimony that we belong to Him.

Also notice (v 14) that Daniel knows that God’s Word stands, and even though hundreds or thousands of years may have passed, God would keep His Word to bring the disaster upon His people that the covenant demands.  This is of great importance to us today, as God has spoken of the end-times and great tribulation that will come upon Israel and the nations, and upon the saints. (Dan 7:23-27; 8:18-26; Mt 5:17-18; Rev 12:13-17; 13:1-10)

Time does not nullify God’s Word or His standard or His ways to accomplish His goal.

Having confessed his and his peoples sins, Daniel then goes on in his prayer to plead (supplicate) the Lord to turn away from His anger and fury from His city Jerusalem and His people and to act for the sake of His holy name to restore His people to their land which He promised to give them when He brought them out of Egypt.  Daniel is asking God to extend mercy now, since the 70 years are ending, not because they deserve it for any righteous deeds they have done, but because of His great mercies. (Rom 11:28-36)  Daniel is energized by the need for the Jews to get out of a foreign land and back to the land of their fathers, all for the sake of the holy name of YHVH, God of Israel, because His people and city are called by His name. (Ezek 36:16-38)  Daniel knew that God’s Kingdom was connected with Israel back in the Land, with the Temple rebuilt in Jerusalem, and that the honor of the Name of the one true God was at stake among the nations round-about. (Ps 122; 137:1-6)

What is striking about this Holy Spirit-led prayer (Jude 20-21) is that Daniel says not one word in his prayer against the people or the government where he is living and serving.  He prays as a man of God concerning the righteousness of YHVH for the present suffering of the [chosen] people of God, and for God to act for His own holy name’s sake in grace for His people and city and land.

As Daniel was still speaking, praying, petitioning the Lord, the ‘man’ Gabriel was sent to him to give him skill to understand something beyond what Daniel had realized.  It is written here that Daniel was greatly beloved.

If we have a real interest in God’s interests, in our Father’s business, and how that is connected with Israel, and also for every individual person, and for the churches and the nations, we will actively read the Scriptures as being what they are – the Word of the Living God – and pray in accordance with what is written, and with the sanctification of the Name of our Father in Heaven a top priority as to why He should fulfill His promises and intentions. (Mt 6:9-10)

As Daniel also understood the character of God that He had not forgotten the necessary judgments for breaking the covenant, so that is still true today.  We can learn from Daniel the relevance and importance of praying and supplicating with understanding what God’s plan and will are, and that there is an appointed time, and that all is to be in accord with God’s righteousness, His mercies, and His holy Name.  God is looking for individual persons to accept responsibility, as Daniel did, to show His favor upon, even while a nation remains under judgment and wrath of the holy God.  There is a holy remnant within every nation and people group of those who serve the only true God and Savior.

Are we as awake to God’s Word as Daniel was?  Do we recognize the signs of the times that we are living in, and knowing what the Body of Messiah should do?  Are our prayers and affairs consistent with God’s revealed plan and purpose?  Are we humbling ourselves and seeking God’s face, identifying with our brethren and our fathers in the sins against our great and awesome God, so that our Father in Heaven will hear our prayers in Yeshua’s name?

I cannot say that God will reveal something new or great to us like He did to Daniel, or that the Lord will send Gabriel to explain things to us.  The Scriptures are already written – not to be added to, and not to be taken from.  But the Holy Spirit will give us greater understanding of what is written, so that we can take the gospel to others and live our lives with holy expectation of the great and blessed redemption to come, and to be a blessing to others in our service for our Lord.