Daniel Chap 8 returns to the Hebrew language of the Jewish people in their homeland and
in their prayers.  The dreams and visions recorded in the whole of the book of Daniel build upon and confirm the truth of each of them.  They are consistent; and in this chapter we will see again the “little horn” that first appeared in the previous chapter, written in Aramaic, although this time in a different setting. The ram and the goat are still another description of two of the four beast kings and of the four metal kingdoms. (Dan 2; 7)   Let us continue to keep in mind that the book of Daniel had been sealed and closed until these last days:  it is now open, and opening.  The vision here is also said to be for the time of the end at the appointed time. (v 17, 19, 26; 9:27; 10:14; 11:27, 35, 40; 12:4, 9, 13) 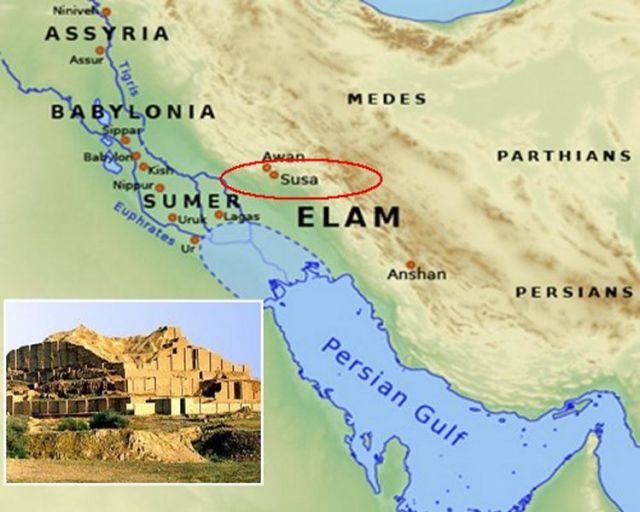 v 1-2   Daniel had this second vision in the third year of King Belshazzar (548/547 BC), two years after his first dream.  In the vision, Daniel saw himself in Shushan, the capital of Elam, and by the Ulai River.

We know Shushan (Susa) from the Scroll of Esther, and it was the capital of the Medes and Persian Empire (the second kingdom of silver, and the second beast that looked like a bear).

v 3  Daniel saw a ram with two horns by the river, with one horn higher that grew up after the other horn.

v 4  Daniel saw the ram pushing westward, northward, and southward, in a way that no animal (beast) could stand against it; nor could anyone deliver from his power, and he did whatever it wanted to do, and became great. (This ram was eastward.)

v 5  As Daniel was thinking of this, suddenly a male goat came from the west, flying, as it were, across the whole land.  This goat had a notable horn between its eyes.

v 6  The goat came to the ram by the river, and ran at him with furious power. 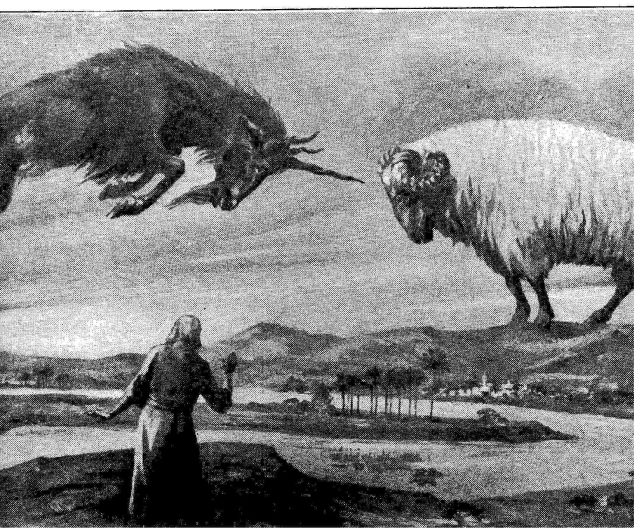 v 7  The goat attacked the ram with rage, and broke his two horns.  The ram had no power to withstand the goat, which threw the ram down to the ground and trampled him.  No one could rescue the ram from the goat. 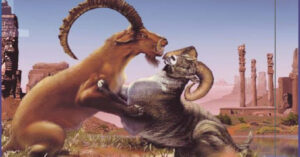 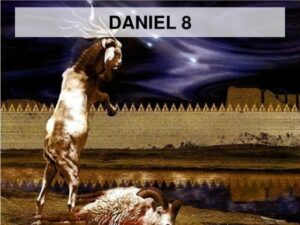 v 8  The male goat then grew very great, but when he became strong, his large horn was broken, and in its place four notable horns grew up in all four directions.

v 9  Out of one of the four notable horns came a little/small horn, which grew to become great, toward the south, east, and west – the Glorious Land – meaning that this little/small horn came up out of the northern horn. (The Hebrew words for ‘little’ and ‘small’ in Ch 7 and Ch 8 are not the same.) 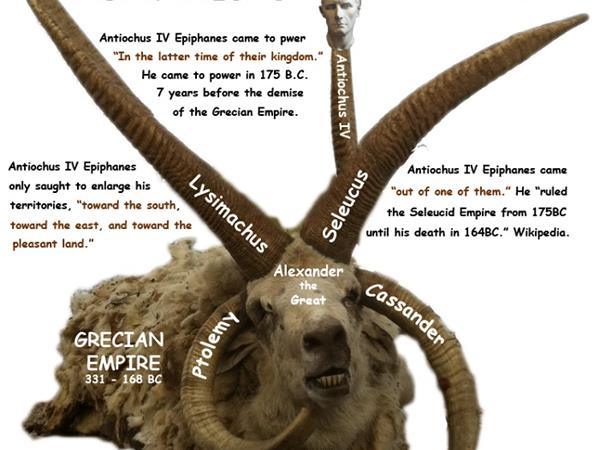 v 10  This little horn grew up to oppose the host of Heaven, and cast down some of the host, and of the stars, and trampled them. (Rev 12)

v 11  He exalted himself against the Prince of the host (Josh 5:13-15), and stopped the daily sacrifices, and destroyed the Temple of God.

v 12  Because of transgression, the horn’s army opposes the sacrifices, and he cast truth to the ground – makes truth lies, and blasphemes God — and prospers.

v 13  Daniel heard a holy one speaking, and another divine being said to that one, “How long will the vision be, concerning the daily sacrifices and the transgression of desolation, the giving of both the sanctuary and the host to be trampled underfoot?”

v 14  And he said to Daniel, “For 2300 evening morning; then the sanctuary shall be cleansed.”

Okay, let’s take a look at some of what we have quickly gone through.  Two animals are featured here, both in attack mode.  The ram with is butting its way north, south, and west in a manner that no nation could stop it, rescue from it.  It did what it wanted to do.

But then, the one-horned goat came flying from the western side in a rage against the ram, and mauled it.  No one could save the ram.  This male goat grew very great, but at its height of power, its large kingdom was broken into four principal parts.  Out of the northern region of this kingdom, a little horn grew to greatness, and set its sights on the south, the east, and the Land of Israel.

Even though Antiochus IV – Antiochus Epiphanes — was a short-term partial fulfillment of this little horn arising out from the Greek male goat northern kingdom (Seleucid), Yeshua made it clear in His discourse on the end-times that this verse is not primarily about Antiochus, but about the Antichrist. (v 17,19,26; Mt 24:15).  Southward of the Media-Persian ram would be Saudi Arabia or Egypt (the King of the South); east would be Iraq; the Glorious Land is Israel.

This king exalted itself against the holy people of God, and even set itself against the Prince of the Host – against the Messiah (Ex 7:4; Josh 5:13-15).  Because of transgression of the host — the Jewish people — he was authorized to bring an end to the daily sacrifices in the Temple (during Daniel’s exile there was no Temple, after having been destroyed by the Babylonians, so this suggests a third temple in the end-times), and he made the truth a lie.  He is allowed to succeed in what he was doing.  When the Antichrist is prospering, the believers are suffering for Yeshua’s/Jesus’ sake and the gospel, and suffering with the Jewish people and with Israel as a nation.

Do we love truth? Do we know what it is, and where it is found?

Daniel is told that this terrible period of the vision concerning the sanctuary will be for 2300 daily morning and evening sacrifices (1150 days; Ex 29:38-46), and then the sanctuary shall be cleansed, and rededicated to its holy service as the place of acceptable sacrifice in the House of YHVH God.  The abomination of desolation would mark the beginning of the final period of distress to bring Israel to call upon the name of Yeshua for salvation, and for all Israel to be saved. (Jer 30:1-24; Joel 2:30-32; Mt 23:39; Hos 5:15 – 6:1-3; Zech 12:8-14; Rom 11:25-28)  I take it to be a short time between the cessation of the sacrifices and the abomination of desolation, if not simultaneous. The physical Temple is very important to God — even though it cannot contain Him — and He will have sacrifices offered in righteousness there.  The Levitical priesthood has never properly understood that, and the LORD will purge them in order that they do understand and perform their holy service acceptably to Him.  (Born-again believers now — whether Jewish or not; whether proven descendants of Zadok or not — are not Levitical priests, but priests in Messiah after the order of Melchizedek.  We no longer need to offer any other blood sacrifice having accepted Yeshua’s once-for-all sacrifice for sin.  Praise God!) YHVH has a covenant with Aaron, which He will keep, just as with David. (Mal 3:1-3; Jer 33:14-24)  This will be fulfilled during the Millennial Kingdom. (Ezek 40 – 44) 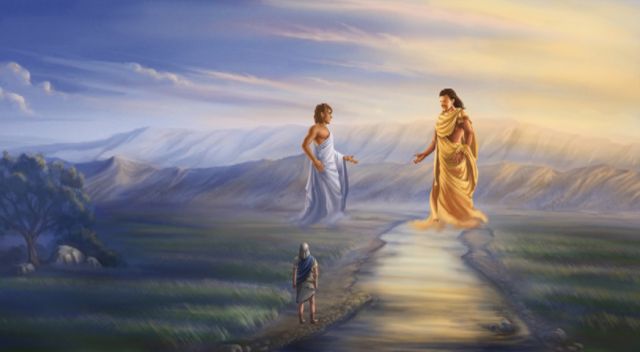 v 15-16  While Daniel was seeing the vision and seeking its meaning, someone looking like a man was standing before him.  And Daniel heard a man’s voice from the Ulai river, who called and said, “Gabriel, make this man understand the vision”.

v 17-18  Daniel was afraid, and fell on his face.  Gabriel told Daniel to understand that the vision is for the time of the end. Daniel fell into a deep sleep, but Gabriel stood him on his feet.

v 19  Gabriel is telling Daniel to what he is making known to him will happen at the end of the wrath, at its appointed time.

v 20-21  The ram with the two horns that Daniel saw are the kings of the Medes and of Persia.  The male goat is the Kingdom of Greece, and its large horn between its eyes is the first king.

Yavan (Ionia; Western Turkey) is Greece in the historic setting following the kingdom of the Medes and Persians.  But Greece did not yet exist when Daniel lived; Yavan was the western Mediterranean coast of Asia Minor (today’s Islamic Turkey) and Macedonia.

v 22  Regarding the broken large horn and the four horns that came up in its place:  four kingdoms shall arise out of that nation, but not having its power.

Alexander the Great was the large horn, who was the first king of the Macedonians, the Greek Empire.  After his death, four principal men became kings of four parts of Alexander’s kingdom. None of them, even all of them together, had his power.

v 23  In the latter time of their kingdom (of the four), when the transgressors have reached their fullness, a king shall arise, having fierce features, who understands sinister schemes.

As a partial fulfillment of this prophecy, Antiochus Epiphanes arose out of the northern Seleucid kingdom as a little horn who became great and evil.  But we have seen that this prophecy is not actually about him, but about the antichrist in the time of the end.  The Antichrist comes into power at the height of evil and violence in society, as in the days of Noah and of Sodom.  The transgressors reaching their fullness is the falling away that Paul writes about, allowing for the revelation of the Antichrist. (2Thes 2:3-4)

v 24  This King will be empowered not of himself, but of Satan; and he will be destructively evil, and overcome mighty people, and the Jewish people and the saints. (2Thes 2:9-12; Rev 13:1-7)

v 25  Deceit will be powerful during his rule, and he will exalt himself in his heart. He will destroy many in their prosperity.  He will stand up against the Prince of princes – against the Lord Messiah – but he will be broken without human means. (Rev 17:12-14; 2Thes 2:8)

Here Gabriel is confirming the vision, and the time reference which God is giving us for the daily sacrifices – each day perpetually in the morning and in the evening — in the coming temple from the time they are stopped by the Antichrist (initially by Antiochus in the days of the Maccabees, and the battle to cleanse the altar.  From this came the holiday of Hanukkah).  And once again Daniel, and we, are being told that this is for the end-times.  The book has been sealed, until our days. (12:4,9,11-12)

v 27  Daniel was greatly shaken by the vision, and was sick for days, but no one else understood what he had seen and given to know.  He went back to his work for the king.  Daniel was told to seal up the vision, because it pertains for many days in the future. (12:4,9)  This again puts the focus of the little horn prophecy at the time of the end, and on the Antichrist, rather than on Antiochus Epiphanes.

Brothers and sisters, we are living in increasingly troublous times, and we may be physically and emotionally ill because of what we are witnessing, and what we know to be coming.  But, by the grace and  power of God, we can carry on in service to our King, wherever He has placed us, in whatever position and place of employment we may be. It could be, too, that other believers will not understand, not to mention unbelievers.  We are to be faithful to the Lord towards both, that we be prepared, and that many might be saved while it is still “today”.

Daniel 12:1-13 — The Light Will Shine Brightly Out From The Darkness; Blessed Is He Who Waits